After years at the heart of Los Angeles’ music scene, Hollywood Vocal Studios is branching out to the Music City! Lee Lontoc has opened up a studio in Nashville, Tennessee, bringing industry expertise to a whole new audience. He hopes to foster an eclectic musical culture, merging the best of both east and west coast styles and sensibilities.

Lee is an expert in both the R&B and Country genres and has guided and influenced top artists in each genre for years—both in a live and recorded capacity. Let Lee help you attain perfect technique and impeccable style, helping you sound your best whether you’re recording solo in a studio, or performing on stage in front of thousands. 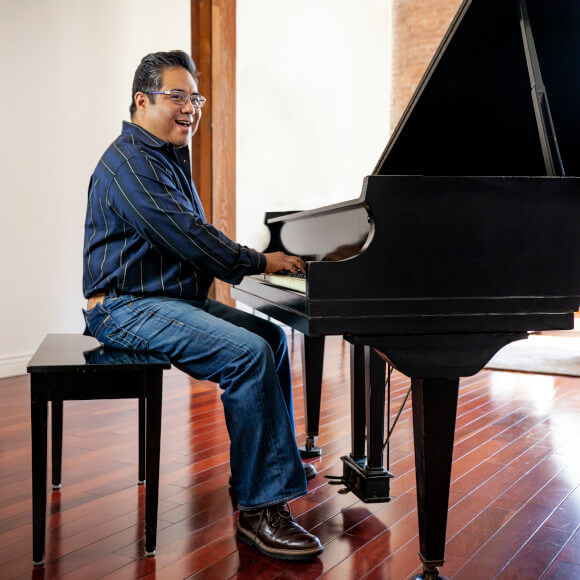 Music was Lee’s first love. He started playing classical piano at the age of 6, and continued throughout college. He attended Berklee College of Music as a teen and then went on to study at the infamous Dick Grove School of Music in Studio City, CA. There he studied with some of the greatest musicians in the country, from Dick Grove himself to Clare Fisher, Joe Harnell, Lou Levy and David Angel.

As a touring musician, Lee has shared the stage with some of music’s most famous luminaries, including George Michael, Jermaine Stewart, Manhattan Transfer, Chick Corea, The Brecker Brothers and others. He apprenticed under renowned vocal coach Seth Riggs, and became the Education Advisor for Riggs’ Speech Level Singing International society. There, he helped organize and run educational seminars for the local SLS Teachers to ensure they were properly trained in the SLS Technique. He eventually achieved the title of Master Coach, and has since been helping to educate a new generation of up-and-coming singers and musicians.

Over the course of his career, he has coached Saoirse Ronan (Little Women) Melanie Brown (Spice Girls, America’s Got Talent), Mike Dirnt (Green Day), Diego Schoening (Timbiriche, Un Nueva Dia), Shannon Elizabeth (American Pie, That 70’s Show), Emma Caulfield (Buffy the Vampire Slayer, Once Upon A Time), Fatlip (The Pharcyde) and many others. He knows what it takes to get the most out of your instrument, and will help you achieve a level of vocal proficiency you only dreamed possible.

We use cookies on our website to give you the most relevant experience by remembering your preferences and repeat visits. By clicking “Accept All”, you consent to the use of ALL the cookies. However, you may visit "Cookie Settings" to provide a controlled consent.
Cookie SettingsAccept All
Manage consent

This website uses cookies to improve your experience while you navigate through the website. Out of these, the cookies that are categorized as necessary are stored on your browser as they are essential for the working of basic functionalities of the website. We also use third-party cookies that help us analyze and understand how you use this website. These cookies will be stored in your browser only with your consent. You also have the option to opt-out of these cookies. But opting out of some of these cookies may affect your browsing experience.
Necessary Always Enabled
Necessary cookies are absolutely essential for the website to function properly. This category only includes cookies that ensures basic functionalities and security features of the website. These cookies do not store any personal information.
Non-necessary
Any cookies that may not be particularly necessary for the website to function and is used specifically to collect user personal data via analytics, ads, other embedded contents are termed as non-necessary cookies. It is mandatory to procure user consent prior to running these cookies on your website.
SAVE & ACCEPT